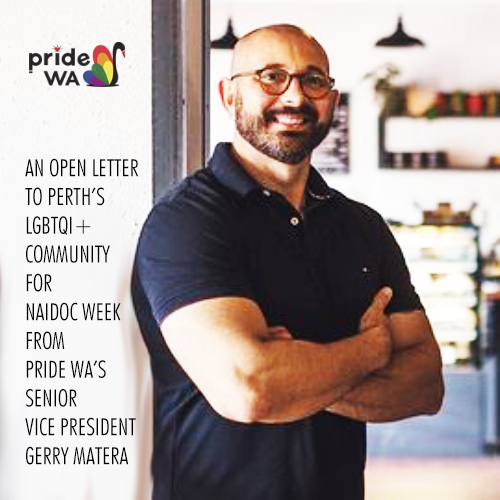 This week, PRIDE WA announced the appointment of a CEO, a first step in facilitating PRIDE’s expansion and to give it a voice beyond cultural events to challenges requiring education, support and advocacy.

As we approach our 30th Pride Parade, this marks an important moment for us as the longest running and most visible LGBTQI+ community group in Western Australia.  Until now, like so many “arts and culture” organisations, we have struggled for funding and resources.  This broader mandate for PRIDE has the potential to allow the organisation to unify and for our community to flourish. We have to support each other. Since joining Pride WA in 2020, it has been tough for me to witness how LGBTQI+ people and organisations behave toward each other. I have witnessed identity politics and a lack of an overall willingness to come together on the big issues that matter most and that must change.

As a Nyoongar traditional owner and the first Aboriginal Senior Vice President of Pride WA, I want to take the opportunity during NAIDOC Week to call for reconciliation within the LGBTQI+ community.

Imagine what we could achieve as a community if we resolve to rise above lateral violence, to be genuinely inclusive and supportive of each other, tackling the big issues that face many LGBTQI+ people head on every day, as a unified group. As part of this reconciliation I call on the community to give greater voice to Aboriginal LGBTQI+ community members and reject the temptation for tokenism. Lesbian, gay, bisexual, queer, transgender and intersex Aboriginal people have an unenviable challenge as they represent diversity within the already diverse Aboriginal culture. We want a seat at every table to really voice our concerns that matter to our mob.

I call on corporates and governments to increase their assistance of PRIDE WA as it expands.  To deliver on our vision we need funding to facilitate education, training and advocacy.  A proper system of accountability is needed to provide a genuine sense of place, safety and belonging for all LGBTQI+ people in the workplace, schools and society in general, so tokenistic gestures or rainbow ticks must be met with closer scrutiny.

This NAIDOC Week, I encourage all LGBTQI+ community members and other LGBTQI+ organisations to develop relationships based on unity and goodwill toward each other and in the spirit of true reconciliation come together for the greater good.